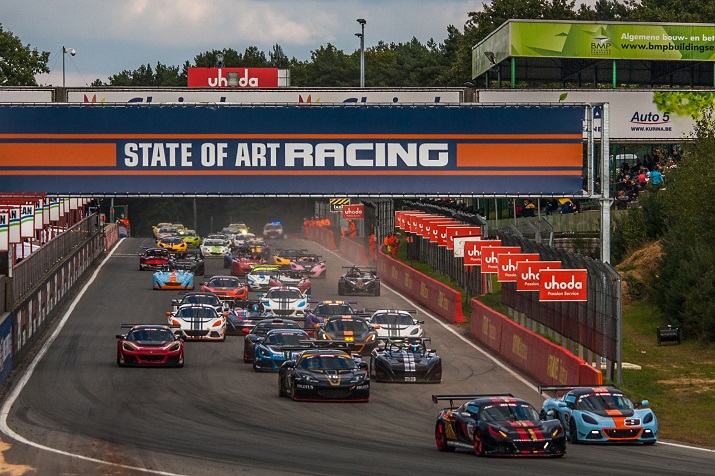 Lotus Cup Europe makes its second visit to Belgium on 9-11 August, with the country’s Flemish region getting a taste of British sports car action at the Zolder circuit, home of the Belgian Grand Prix in the 1970s and early 80s.

Last time out at Magny-Cours in France, all three races were won by Hungary’s Bence Balogh, taking his season tally up to seven victories. This has given him a healthy title lead of 60 points over his closest rival, meaning that he has more than a win in hand heading into the final seven races of the season.

Balogh’s Evora isn’t the only one to have been the class of the field this season, indeed all of the overall wins have been exclusively claimed by three of the four Evoras in the field. Britain’s Steve Williams is Balogh’s closest rival in the V6 Cup class, at least in terms of the title race, whilst compatriot Jason McInulty broke into the winners’ circle at Spa-Francorchamps and will be after some more Belgian good fortune this weekend.

Leading the Exige charge will be reigning champion John Rasse, who led in France, but has yet to win so far this season. Another former champion, Hungary’s Tamas Vizin holds this circuit in high esteem, having won the title here in 2016 and taking a podium finish last year. Jason McInulty’s brother David, Belgian Lotus dealer Thierry Verhiest and Dane Nikolaj Ipsen should also be on top form, along with Sweden’s Daniel Palma and Robin Nilsson.

In the all-French 2-Eleven class, Christophe Lisandre and Anthony Fournier have both defeated the V6 cars for overall victory in the past, but both are more likely to be fighting for class victory. However, Chris Laroche has become the category favourite in the car he shares with his brother Franck. Also hoping for podium positions in this all-French affair will be Nathalie Genoud-Prachex and Eric Libor.

The Open class is another one-country affair, with the Brits slugging it out. Andrew Wright suffered mechanical issues in Magny-Cours, leaving the former title challenger 11th place in the standings, but he’s still ahead in the class championship. However, with reliability on his side for once, David Harvey and his veteran 340R will be up for more wins at Zolder.

At Magny-Cours the Production class saw at least four drivers disputing first place. Sweden’s Sven Pettersson has taken the most wins, and his consistent top three scores place him in the thick of the title fight with Balogh. Britain’s Mark Yates and Sweden’s Cai Cederholm have also claimed class honours, however, with the former being the man to beat at Magny-Cours, whilst France’s Thierry Hedoin is long overdue a victory. Joining the Elise Cup R fray this time will be 2-Eleven refugee Jean-Pierre Genoud-Prachex, having already made his class debut with an S1 in France.

Previous rounds at Zolder have supported the FIA European Truck Championship in September, but this year’s date, around six weeks earlier than usual, ties in with the circuit’s annual 24 Hour race. This means that the two Lotus Cup Europe practice sessions will take place on Thursday, followed by a late evening qualifying session at dusk. Friday is a rest day, with the two races taking place on Saturday.