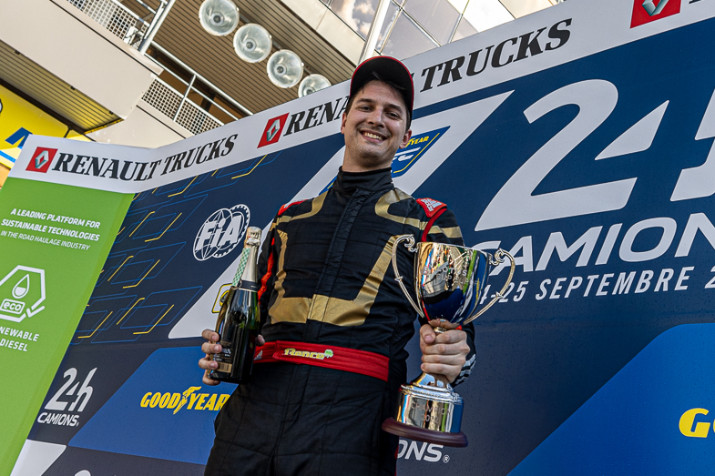 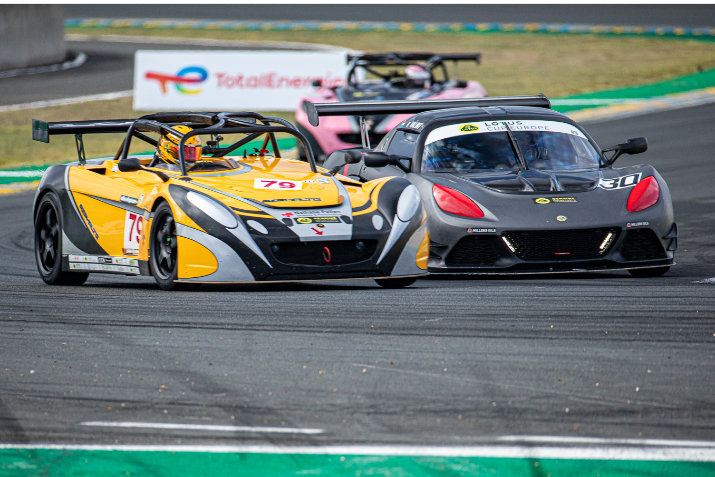 Balogh came into the weekend at the top of the championship standings with only 211/Open driver Jean-Pierre Genoud-Prachex posing a threat to his success. After an eventful qualifying session where 12 drivers saw lap times deleted because of track limits, Balogh and Genoud-Prachex qualified on pole in their respective classes. Bence Valint surprised everyone in the Exige Cup class by setting an impressive lap time of 1:46.068, placing him next to Balogh on the front row despite it being his first visit to Le Mans. Production class leader Jason McInulty took another class pole position ahead of fellow ES Motorsport drivers Mark Yates and Bailey Edwards. 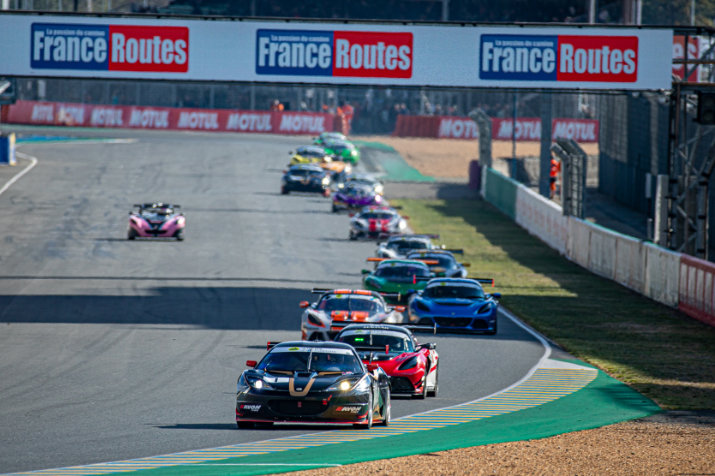 In the opening race Bence Balogh and Tamas Vizin resumed their yearlong rivalry after an incident on the first lap forced Valint and Daniel Palma to retire from the race. Balogh eventually took the chequered flag, followed by Vizin, Paul Marechal and Thierry Verhiest. In 211/Open, Jean-Pierre Genoud-Prachex’s hopes of the overall title looked in jeopardy when a mechanical issue left him unable to classify, leaving wife Nathalie to take the class win and putting an end to what had been a perfect streak of wins this season. The Production class put on a spectacular show as always, with Jason McInulty taking the win from Mark Yates and Dave Carr, but it was the fight between the 2 seemingly identical green Elise Cup R’s of father and son, Mick and Bailey Edwards, at the back of the field that caught the attention of spectators as Mick Edwards made a long-awaited return to racing following an accident at Imola earlier on in the season. 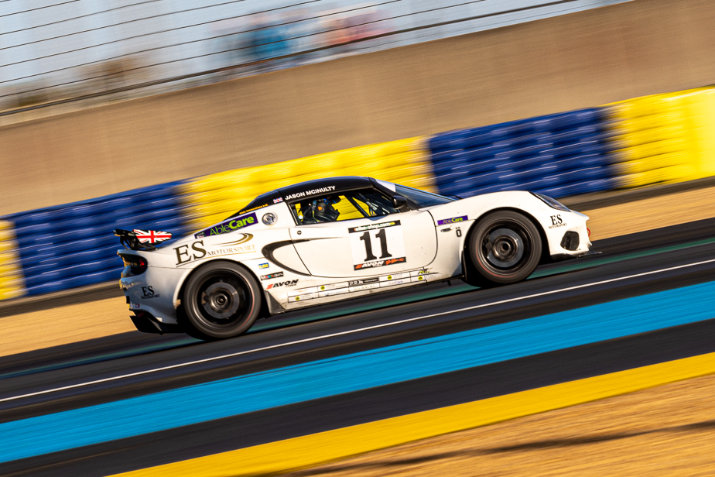 Sunday’s first race ended with a familiar Hungarian 1-2-3 as Balogh took yet another win, this time however in front of 17 year old Bence Valint who took his first class win ahead of Vizin’s Komo-Tec Exige. Palma came fourth followed by Nikolaj Ipsen, the Dane’s first race weekend of the season and Verhiest. Gyorgy Balogh finished in 8th, second in the GT Cup class, whilst Sweden’s Robin Nilsson and Germany’s Ronald Andraczek completed the top 10. In 11th was 211/Open winner Jean-Pierre Genoud-Prachex, Production leader Jason McInulty crossing the line behind him in 12th place closely followed by Mark Yates, Nathalie Genoud-Prachex and Bailey Edwards. David McInulty in 18th completed the 211/Open podium. The results left the championship standings more or less unchanged leading into the third and final race of the season where double points would be on offer. 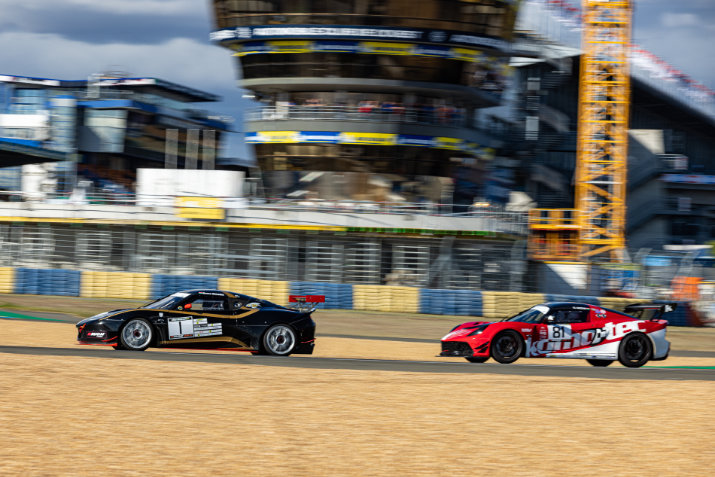 Hungary’s Balogh took the final win of the season after a tough battle with Vizin, the Evora and Exige swapping places so often it was almost impossible to follow. Knowing they only had to finish the race to win the overall championship most drivers would have backed off and protected their points. However, it seemed, not for the first time this season that the win was more important for Balogh than his championship – the sign of a true racer. Bence Valint finished third after an impressive drive that saw him make his way swiftly through the field after starting at the back of the grid, making it an all Hungarian podium for the sixth time this year, whilst Lotus main dealer Thierry Verhiest took the remaining step of the Exige Cup podium. Jean-Pierre Genoud-Prachex scored top points in the 211/Open class, followed closely by Nathalie Genoud-Prachex and Brit David McInulty, the race results a reflection of their places in the championship standings.  Jason McInulty followed in the footsteps of his fellow champions taking one last win followed by Mark Yates and Bailey Edwards. Overall and GT Cup champion Bence Balogh and Production champion Jason McInulty both also setting new lap records in their respective classes during the final race of the season. 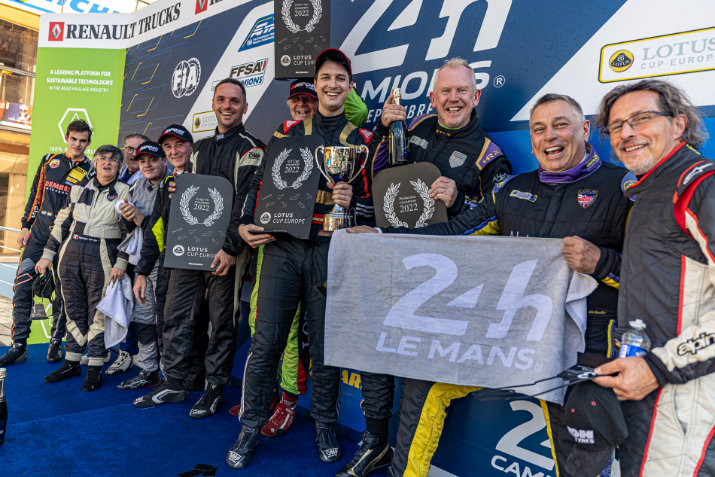 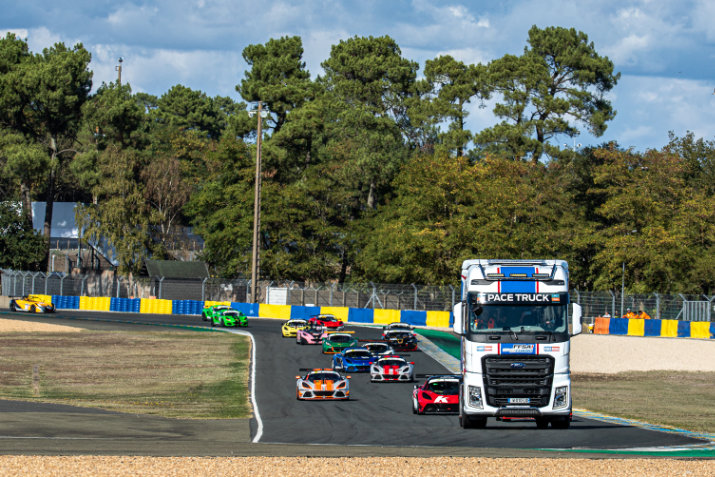 With 12 out of 14 overall race wins and a total of 428 points, Bence Balogh successfully defended his championship title and was crowned Lotus Cup Europe champion on the legendary Le Mans podium for the fourth time in his Evora GT4. 211/Open champion and overall runner-up was Jean-Pierre Genoud-Prachex with 402 points and a total of 13 out of 14 class wins, followed by Production champion Jason McInulty whose 11 class wins gained him 375 points. Exige Cup champion Tamas Vizin earned 364 points from 9 class wins and 2 overall wins during the season.

Of course, it would not be possible for any of us to compete without the hard work of the wonderful marshals, medical teams, event officials and we are hugely grateful to them. 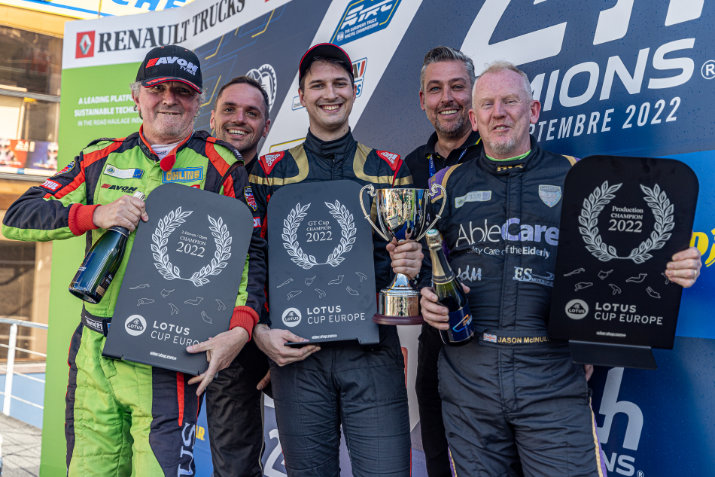